The refusal of the administrative division of the city council of Bucharest to take down a bust of Mircea Vulcanescu, who served as the finance minister in the nation’s pro-Nazi government during World War II, has outraged watchdogs in Romania. The majority of council members chose not to participate in the vote on a resolution to remove the statues from Saint Stefan park in the capital of Romania on Wednesday. It has been contended by the Romanian Elie Wiesel Institute for the Study of the Holocaust that this is a violation of a statute issued by the country’s parliament in 2002 and updated in 2015 that forbade glorifying individuals who have committed crimes against humanity. Additionally, the denial runs counter to Romania’s national anti-antisemitism plan, which was enacted in 2021.

The head of the Center for Monitoring and Combating Antisemitism in Bucharest, Maximilian Marco Katz, explained that Vulcanescu was a part of the Ion Antonescu government that enacted and carried out antisemitic laws and policies that led to the Romanian Holocaust. Between 280,000 and 380,000 Romanian Jews perished in the Holocaust during this time. Later, in 1946, Vulcanescu was given an 8-year prison term by communist post-war authorities; he passed away in prison in 1952. Since then, Maria, his daughter, has advocated for her father’s rehabilitation, but in 2019, the Bucharest Court of Appeal rejected Maria’s lawsuit.

Mark Weitzman, the chief operating officer of the World Jewish Restitution Organization, said, “It is unacceptable that they continue to glorify a war criminal such as Mircea Vulcanescu,” and he urged Romania to keep cooperating with WJRO to address ongoing concerns about Holocaust-era restitution and memory. Despite numerous arguments made in his favor by historians, intellectuals, nationalist organizations, and some activists fighting for the memory of communism victims, the city council’s refusal to vote on the motion to remove the monument continues to serve as a stark reminder of Romania’s efforts to rewrite its dark history. How Ukrainian Jews are Celebrating Hanukkah This Year 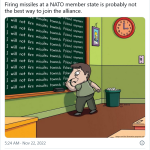